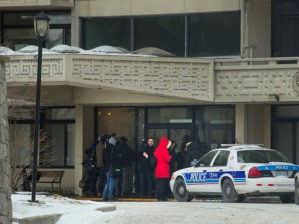 OTTAWA — Police are investigating a bizarre stabbing that left a Russian diplomat lying about his wounds and an employee of the Canadian Forces naked inside an Ottawa apartment.

A man is in custody after police were called to an apartment in the Sandy Hill neighbourhood Friday morning.

A diplomat had been stabbed in the back and slashed on his arms, apparently after an argument at the building at 400 Stewart St. The victim, 44, was taken to hospital in stable condition with non-life threatening injuries.

Sources told the Citizen a man pulled a knife on the diplomat and started to slash him, forcing him to flee to the lobby of the apartment building, where he was found by police and paramedics.

Officers went into the apartment unit to find an employee of the Canadian military naked in bed with blood on him and a knife lying on the ground.

The victim initially refused to talk to police until his diplomatic representative arrived at the scene. Paramedics said he appeared intoxicated and was belligerent to both police and emergency responders.

The diplomat told paramedics that his injuries came from dog bites and refused treatment. He also refused to answer questions from police. Police cuffed and arrested another man, a Canadian, at the building, which is located one block away from the Russian embassy. It is home to many people who work at embassies in the capital region.

Police said the detained man was being questioned but they could not immediately comment on whether criminal charges would be laid. Police could also not confirm if the man taken into custody was the military employee who was found in the bed.

Sources told the Citizen that the victim was drinking with a man in one of the apartments when an argument broke out. It’s not yet known what the two were arguing about.

A Russian interpreter was brought in by police to assist the investigation.

“Obviously we have a language issue where we require a Russian-speaking person,” Ottawa police Insp. Murray Knowles said.

RCMP have been involved in the investigation but all of their police vehicles had left the scene of the incident by late morning Friday.

On Friday morning, a section away from the main entrance of the building with couches was cordoned off by police. Investigators were then led up to the apartment involved.

The Canadian Forces confirmed that military police were initially called to scene of the investigation by Ottawa police.

“It was quickly determined that the Ottawa Police Service is the force of jurisdiction in this matter,” said Capt. Joanna Labonte in an emailed statement.

Minister of Foreign Affairs John Baird said that while his department is disturbed by media reports and has been in touch with the Russian embassy, there is no information to indicate that the stabbing was politically motivated at this time.

“Allegations of criminal incidents in the City of Ottawa are under the jurisdiction of the Ottawa Police Service,” Baird said.

With files from Douglas Quan and Tom Spears