A police officer and a former Russian diplomatic official are among those arrested after authorities seized a large cocaine shipment at the Russian embassy in Buenos Aires.

Security Minister Patricia Bullrich said that 860 pounds (389 kilograms) of the drug were hidden inside diplomatic luggage.

The investigation began after Victor Koronelli, the Russian ambassador to the South American country, and three members of the Russian federal security service, reported to Bullrich that they had suspicions about the luggage found at a school annex of the embassy. 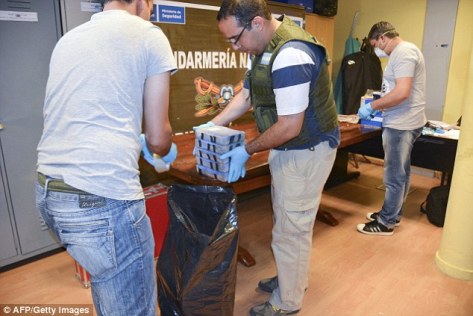 Once authorities confirmed that there were drugs inside the 16 pieces of luggage, they devised a plan to catch the criminals.

They swapped cocaine for flour and placed a GPS to track the luggage and the luggage was flown to Russia in 2017.

Bullrich said three Argentine customs officials traveled to Russia to monitor the delivery, and that Ishtimir Khudzhmov and Vladimir Kalmykov, were arrested when they went to pick up the cargo. 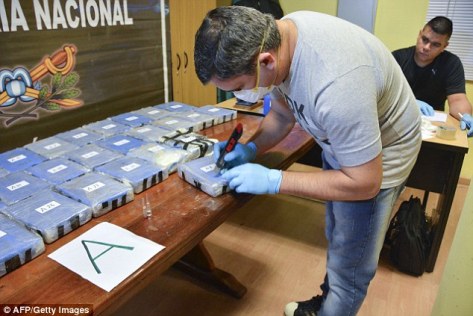 A suspect, who Bullrich only referred to as ‘K,’ was in charge of buying the drug, and introducing it to the embassy in Argentina. He is still at large in Germany and is wanted under an international arrest warrant.

The logistics were also coordinated by former embassy official Ali Abyanov, who was arrested in his Moscow apartment.

Russian-Argentine citizens Alexander Chikalo, suspected of being in charge of the logistics, and police officer Ivan Blizniouk, who is accused of providing contacts to jump through customs controls, were seized in Argentina. 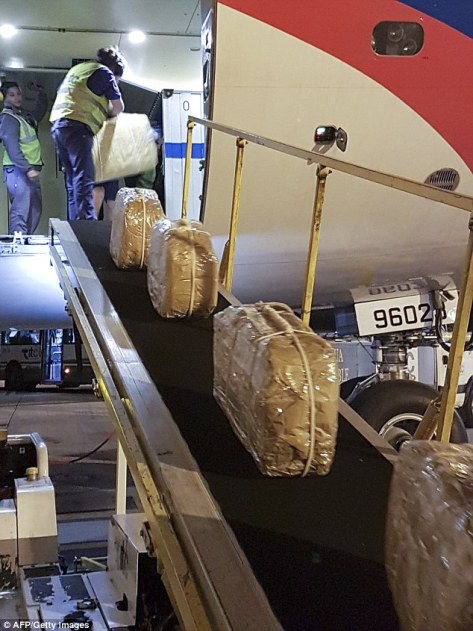 Bullrich said the drugs were discovered had a street value of around $50 million (£35 million).

‘A gang of narco-criminals was trying to use the diplomatic courier service of the Russian embassy’ to ship the drugs to Europe, she said.

‘The cocaine was replaced by flour and monitoring devices were placed to monitor delivery’ of the 16 bags of the drug, Bullrich said.

The drug, of ‘very high purity,’ was destined for Russia and probably also Germany, where the suspected mastermind lives.

‘We believe the German police will arrest this fugitive,’ Bullrich said.

‘This has been one of the most complex and extravagant drug-dealing operations that Argentina has faced’, Bullrich said at a press conference.

‘At 3 a.m. we had to send people from the border police to buy the 389 kilograms of wheat to the central market because no one had 389 kilograms in a warehouse. The drugs never traveled to Russia. Only the flour traveled.’

The minister said Russian security service agents ‘came to Argentina on three occasions to assist in the investigation’ that took more than a year.

One of the two people arrested in Argentina is a naturalized Russian who was a member of the police force in Buenos Aires, said Bullrich.

Investigators believe the cocaine likely originated in Colombia or Peru.